Codbel > IT Blog > News & Events > Artificial Intelligent of Things; The combination between AI and IoT 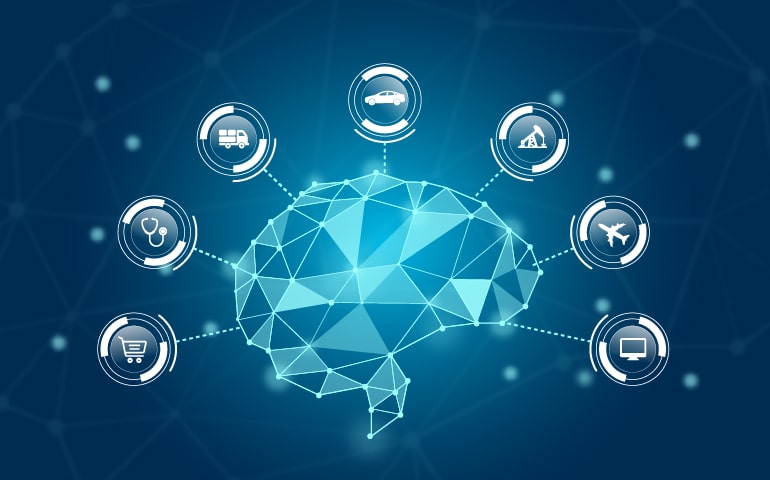 Artificial Intelligent of Things; The combination between AI and IoT

Artificial Intelligence of Things (AIoT) is the marriage between AI (Artificial Intelligence) technologies and Internet of Things (IoT) infrastructure. Alone, artificial intelligence (AI) and the Internet of Things (IoT) are powerful, but combined, these emerging technologies enable enterprises to realize a fundamental digital transformation. The pairing of AI (Artificial Intelligence) with the Internet of Things (IoT) has the potential to transform how industries, businesses, and economies function. The Internet of Things (IoT) is a technology helping us redefine everyday life, but AI (Artificial Intelligence) is the proper driver behind IoT’s full potential.
The Internet of Things (IoT) is an ever-growing network of objects, each having its IP address for connecting with the Internet and communicating amongst those objects of the physical Internet. The Internet of Things (IoT) allows the interconnection between billions of devices, industrial machines, processes, and users to share data with no central coordination. In this reliable mix, the Internet of Things’ role is to aggregate structured and unstructured data and enable the connection between the connected things and users.
To get more value out of this network and dramatically change business and operational models, industry leaders are integrating AI with incoming data from the massive number of IoT devices. Many out-of-the-box, packaged, or vertical IoT solutions leverage AI technologies, particularly machine learning. Machine learning for predictive capabilities is now integrated into most of the leading general-purpose and industrial IoT platforms, such as Microsoft Azure IoT, IBM Watson IoT, Amazon AWS IoT, GE Predix, and PTC ThingWorx. Major vendors of IoT platform software are now offering integrated AI capabilities, such as machine learning-based analytics.
Artificial Intelligence (AI) has emerged as the most promising combined solution for IoT to better leverage, store, and escape uncertainties in decision-making management. While full capabilities for AI and IoT are still relatively in infancy, the two technologies are now being combined in scenarios in which insights and problem-solving improve outcomes for all stakeholders. AIoT is transformative and beneficial for both types of technologies, with AI adding value to IoT via machine learning capabilities and enhanced decision-making and IoT adding value to AI via connectivity, signals, and data sharing. Overall, IoT connected with AI technologies has the potential to result in improved solutions and experiences.
For enterprises in different industries, AI is the natural addition to IoT deployments, which allows for better offerings and operations and gives a competitive advantage to the businesses productivity. Expert systems are used within the Internet of Intelligent Things (IoIT) domain to deliver additional value in the IoT domain, a significantly better understanding of data captured by connected tools.
Given the goal of the IoT devices is data collection and usage, placing data collected from the physical devices through machine learning and AI allows for improvements to these procedures. Where an IoT system might collect and organize data without artificial intelligence, an AioT system takes several steps further. The good news is that enterprises can convert a more significant share of data generated into business insights by harnessing AI and IoT combined powers.

How Artificial Intelligent Can Boost Our Business Process

How to Develop Enterprise App: 5 Best Approaches for Successful Delivery

This site uses Akismet to reduce spam. Learn how your comment data is processed.

We will help you overcome your technology challenges

START WITH A FREE ASSESSMENTFind your Solutions

We use cookies on our website to give you the most relevant experience by remembering your preferences and repeat visits. By clicking “Accept”, you consent to the use of ALL the cookies.
Do not sell my personal information.
Cookie settingsI ACCEPT IT
Manage consent

This website uses cookies to improve your experience while you navigate through the website. Out of these, the cookies that are categorized as necessary are stored on your browser as they are essential for the working of basic functionalities of the website. We also use third-party cookies that help us analyze and understand how you use this website. These cookies will be stored in your browser only with your consent. You also have the option to opt-out of these cookies. But opting out of some of these cookies may affect your browsing experience.
Necessary Always Enabled
Necessary cookies are absolutely essential for the website to function properly. This category only includes cookies that ensures basic functionalities and security features of the website. These cookies do not store any personal information.
Non-necessary
Any cookies that may not be particularly necessary for the website to function and is used specifically to collect user personal data via analytics, ads, other embedded contents are termed as non-necessary cookies. It is mandatory to procure user consent prior to running these cookies on your website.
SAVE & ACCEPT